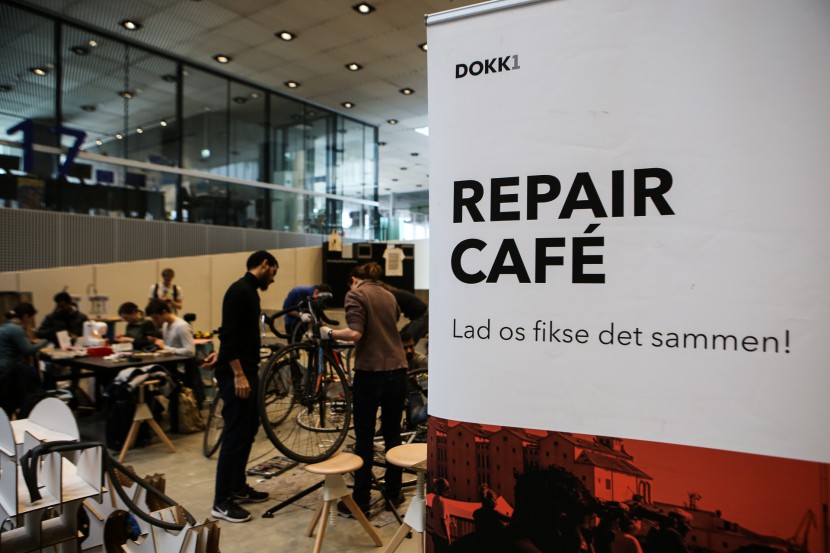 Repair Café, where you can get your broken items fixed, is an ideal solution for your wallet that teaches sustainable living at the same time.

For people living on a tight budget, especially students, broken belongings is not fun at all. The cost of repairs without insurance is often as high as buying brand new. But do not despair! Repair Café Aarhus is there to assist you.

Repair Café is held on the second Saturday of each month at Dokk1, from 13:00 to 15:00. No pre-registration or membership is required; all you need to do is bring your broken items to be fixed for free by volunteers. 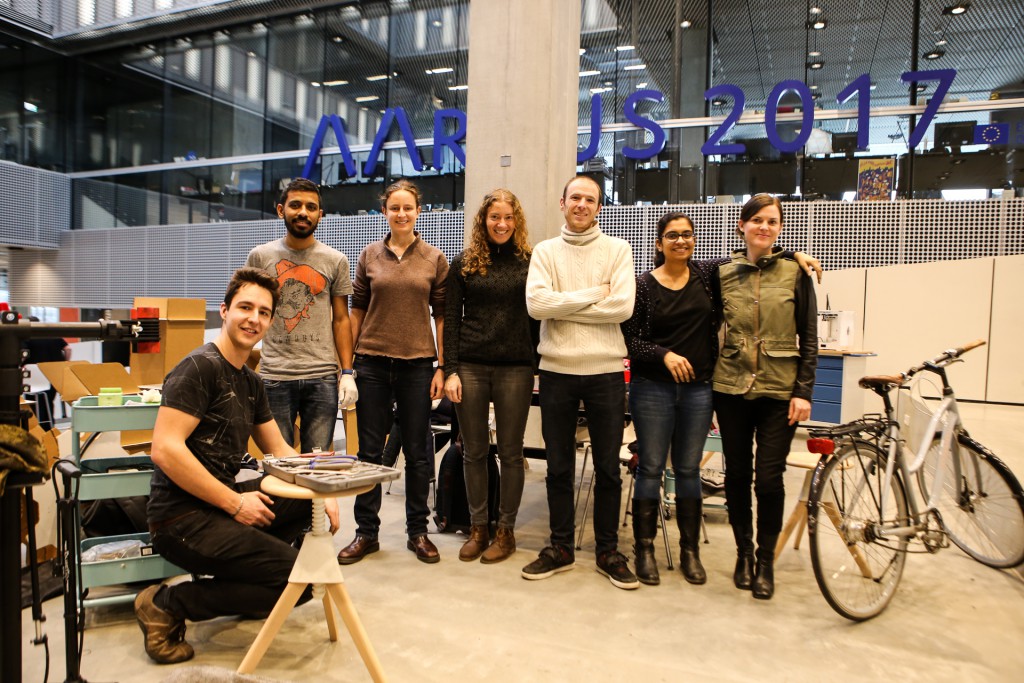 An idea inspired by other cities
The idea started in Aarhus five years ago. Madhuri, from India, one of the five founders, recalls their motivation to open Repair Café, inspired by similar models in Berlin, Amsterdam and other European cities. At that time there was no Repair Café in Aarhus. Madhuri could see that people were throwing away everything for many reasons in daily life, though many items just needed a small fix. So she decided to open Repair Café in order to help people repair and maintain their items without abandoning them. The idea was to help people save money and encourage waste reduction at the same time.

The Repair Café team gathers volunteers from everywhere; not only Danes, but also internationals. Many of them are from ‘Ung Energi’, another youth organisation in Denmark. But according to Madhuri, the ‘core team’ has seven permanent volunteers who show up at every event.

Meeting the volunteers
Chirag is one such volunteer. Originally from India, Chirag has been living in Aarhus for two years now and works for VESTAS, a wind power manufacturer. Since the day he moved he has been volunteering at Repair Café. He spends most of his time at the event fixing bikes. So do Jessie and Caitlin – the two friends moved to Aarhus last year. After a few months they heard about Repair Café from a friend, and soon started volunteering at the event. 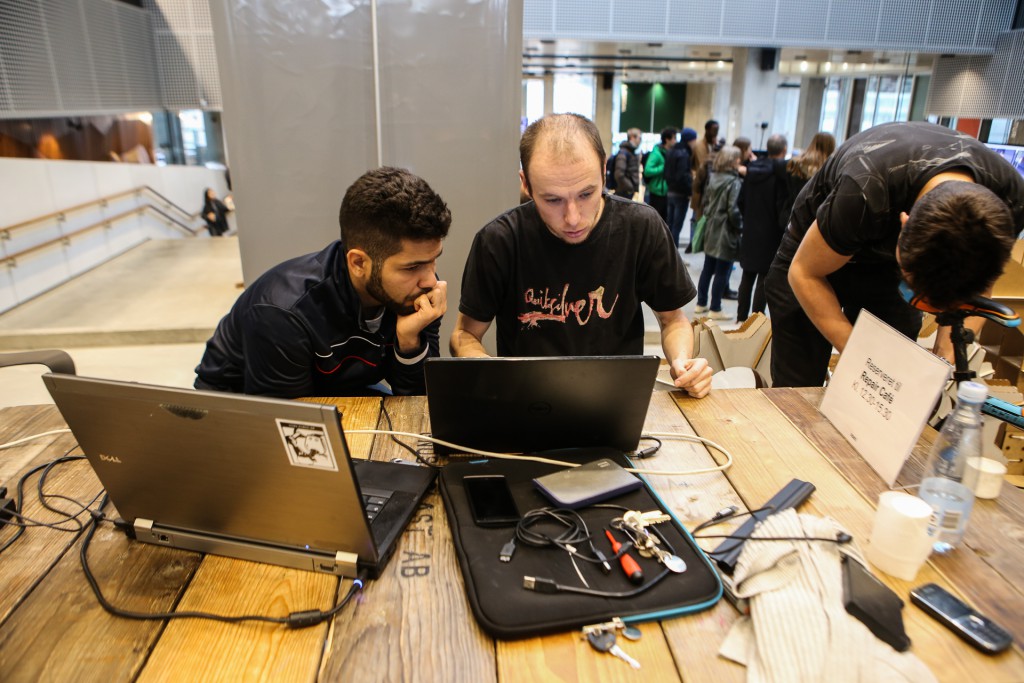 Got a broken laptop? Stephane will give you a hand (photo: Giang Pham)

When it comes to laptops, Stephane, from France, is the guy in charge. He is searching for an engineering job here in Aarhus, but in the meantime spends his time volunteering regularly, which he has been doing since December last year. Stephane realised that laptops in general are not improved much these days, and it is wasteful to throw them away. So, he decided to help people repair their old laptops. He is also contributing to developing the website for the team on a small grant from Aarhus Commune.

Pernille is Danish and lives in Aarhus. Having participated at Repair Café for over a year, she helps people fix their clothes. Sewing is also Pernille’s hobby, and she joined the team to explore her creation, be inspired and learn something new from an existing interest.

For phone repairs, there is Martin, who is said to be very skillful with iPhones in particular. There are also occasional volunteers who come to only some events. Some already have repair knowledge when they come to volunteer, and others don’t, but the whole team learns by doing. 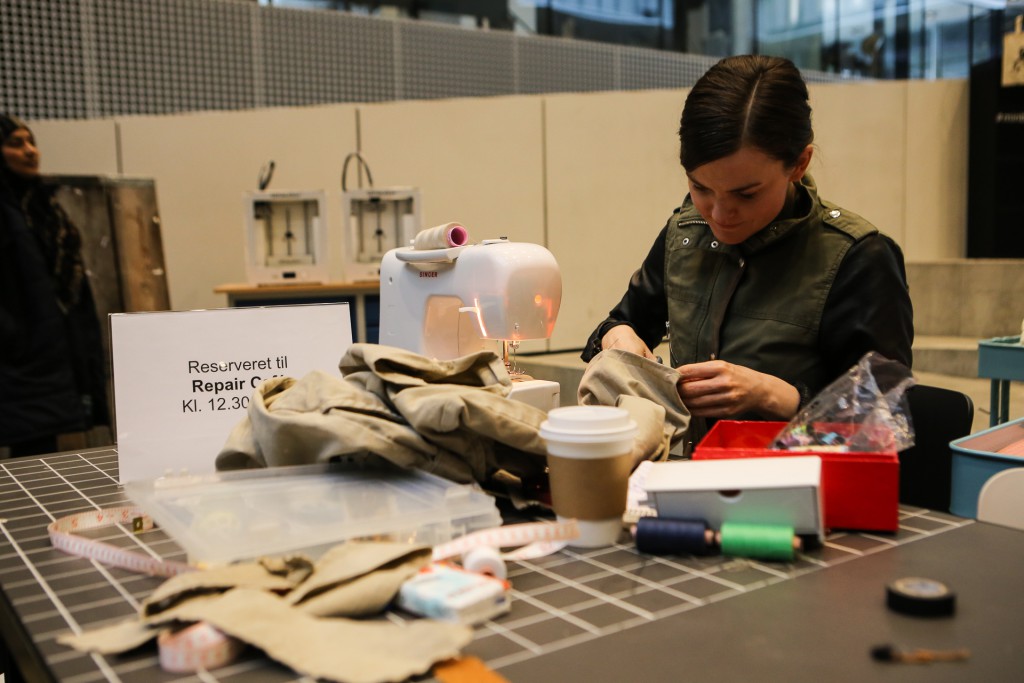 Pernille can fix a rip or a hole in your clothes (photo: Giang Pham)

Bikes are top of the list
Caitlin knows how to repair bikes due to her previous experience working at a community bike repair café in Arizona, US. However, the difference in the bike system between Denmark and the US gives Caitlin new challenges that she has never encountered, for example with the internal gear shifting system, which is not common in the US.

Chirag and Jessie have faced similar situations, but they do not give up on the challenges. When people bring their bike with problems they have never fixed before, they look for solutions online or get advice from repairmen at bike shops or by discussing with one another.

People come here with everything: phones, clothes, laptops… But most of what is brought in are bikes. However, all volunteers are not professionals in their field, and hence cannot guarantee that everything will be fixed. “Sometimes we receive requests for some household devices, but due to the lack of competent volunteers, we can do nothing but apologise to them,” says Madhuri. 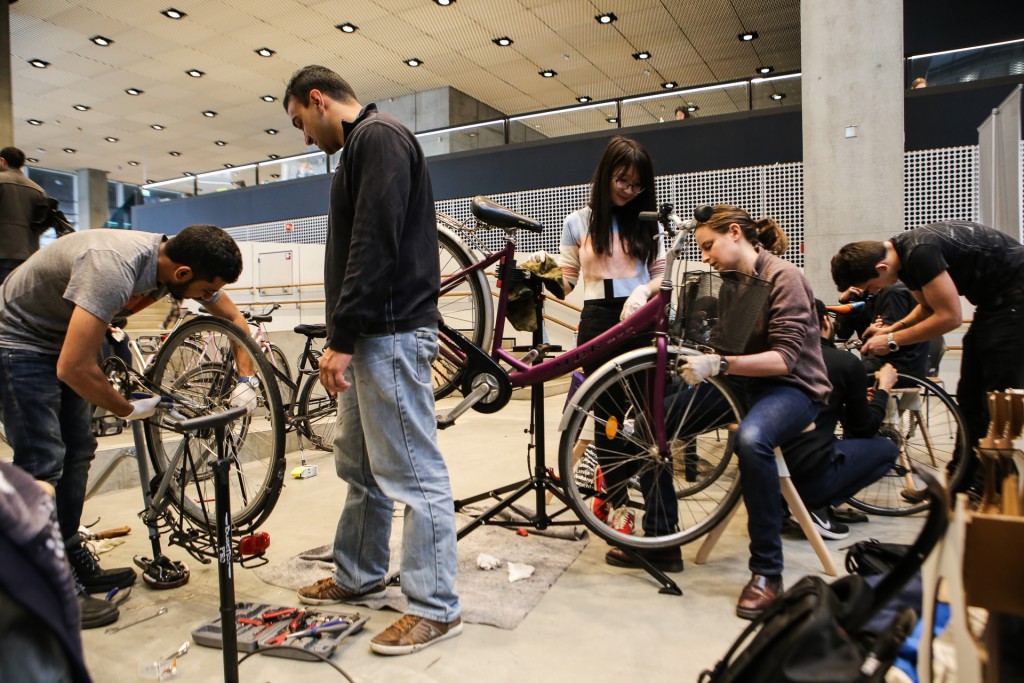 Fixing bikes is one of the biggest tasks (photo: Giang Pham)

What is more, people who bring their items to fix are engaged with the volunteers, and it’s all about teamwork. Especially with bikes, volunteers instruct bike owners on how to fix their own bike by explaining the issue, so next time they will be able to do it by themselves. Usually the team has the basic tools and some spare parts to fix things, but sometimes owners have to go out to buy the bike parts themselves, and then come back to have them fitted.

Reducing waste
By teaching people how to repair their existing items, Repair Café raises awareness of the importance of reducing waste and consumption, and how to live sustainably in the long-run.

Dokk1 has always been a close partner to Repair Café, giving space for the event since it started, and sponsoring the team with basic tools and some bicycle parts. Over its five years Repair Café has been gaining in popularity, and Caitlin reveals that there are some events when she has to repair five bikes in two hours. Chirag also shares his concern when the team sometimes cannot manage to repair all the bikes they receive in one event. That’s why, when asked about the future plan, Madhuri hopes there will be more volunteers to join the team.

So how do you become a volunteer at Repair Café? “Well, anyone can be a volunteer. They don’t need to be skillful, they just need to have interest and ideas in this activity,” concludes Madhuri. 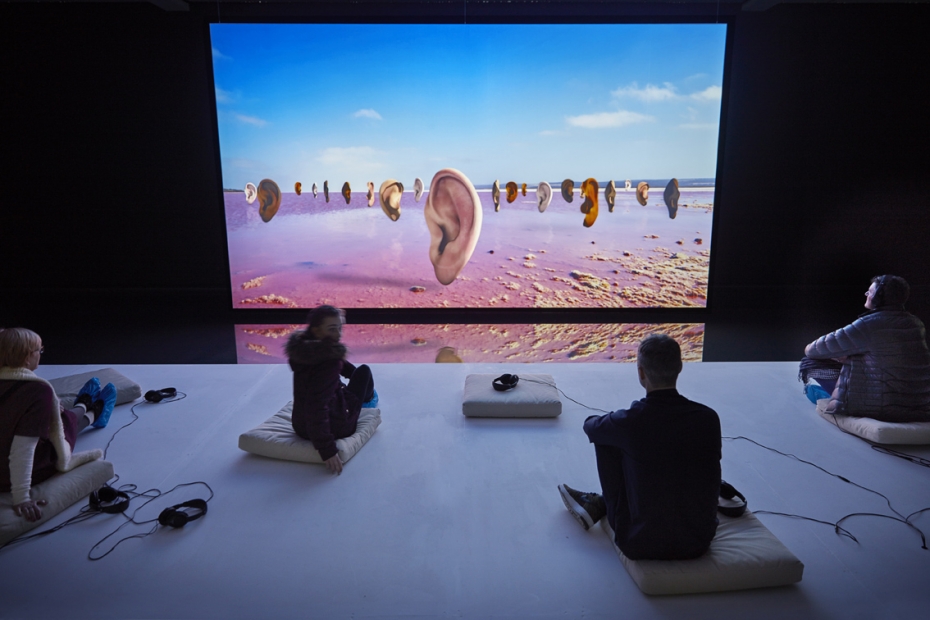 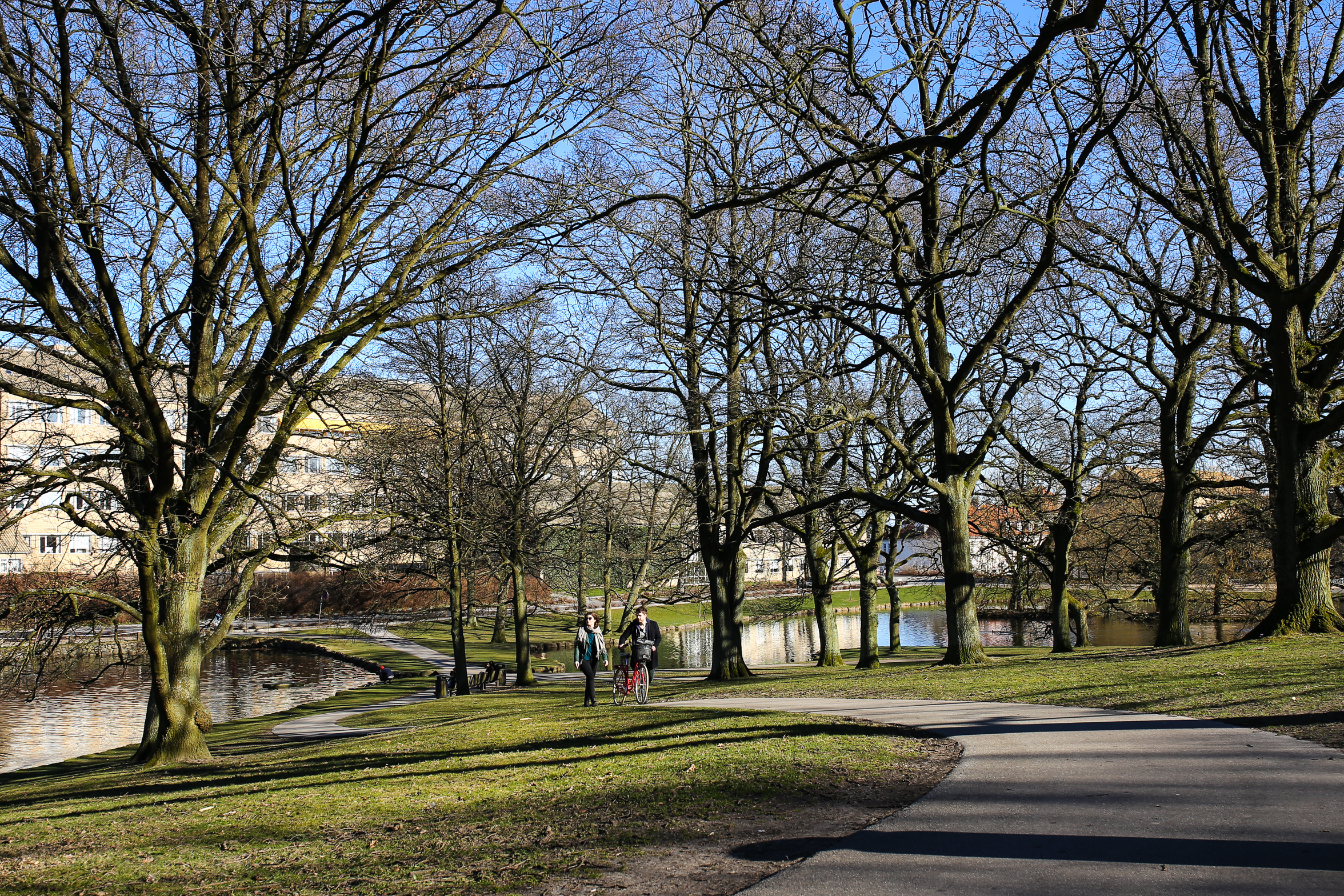 Next article Our pick of the weekend’s top 5 events »