Have yourself some Indian hygge

On a crisp November night, the air rings with laughter and snatches of excited conversation set to the tempo of lilting music. The sight of twinkling candles coupled with the rich aroma of ginger, garlic and onions sizzling in an assortment of spices and hot, buttered buns wafting out of the kitchen, sends a warm tingle down the spine. Quite the ‘hyggelig’ picture, right? “A little early for Christmas”, you say and you’re right because this isn’t a typical Western holiday. Does that have you guessing?

So, while you’re wondering, allow me to rewind and take you on a short journey complete with the sights, sounds and smells from my homeland, India. This is a story of Diwali, one of India’s biggest festivals. Diwali, also known as the Festival of Lights, is originally a Hindu festival celebrating the victory of good over evil. With changing times, it has come to be a festival celebrated in a secular spirit by Indians back home as well as across the globe with equal zest and vigour. The tradition of lighting ‘diyas’ (meaning ‘oil lamps’ in Hindi), or in this case candles, is symbolic of the triumph of good, wherein, light represents righteousness and dispels darkness the signifier of evil. 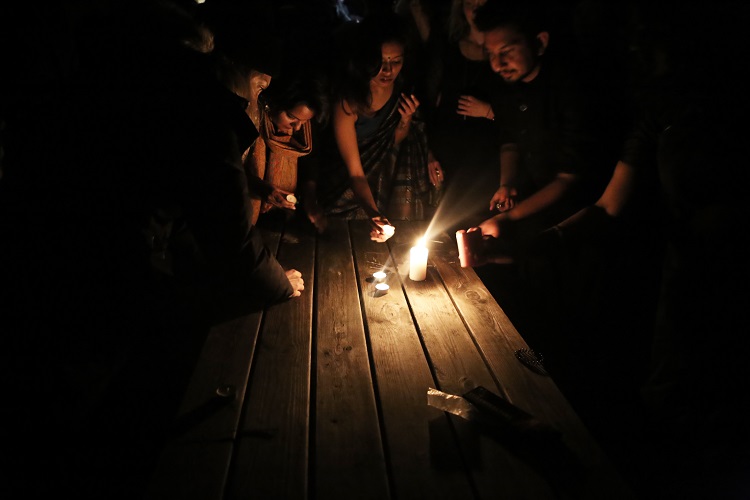 It’s neither Diwali nor hygge without some sublime candlelight! (photo: Wirada Saelim)

The origin of this festival harks back to the Hindu mythological epic called Ramayana where the people of the kingdom of Ayodhya, welcomed the return of their king, Ram, after his victorious battle against the demon-king of Lanka, Ravan, the abductor of his wife, Sita (“good versus evil”, remember?). The festivities commence with a prayer ceremony in honour of goddess Lakshmi, as Hindu households welcome the goddess of prosperity to bless their homes. Every Indian town and city sparkles like jewels strewn upon a black canvas almost mirroring the night sky. Families and friends get together to celebrate and streets are filled with wide-eyed children sporting smiles as brilliant as the fireworks. The kitchens are abuzz with women preparing special treats for the family and the visitors they might receive. Sweets and savoury snacks are the order of the day much to the delight of the young and old. The spirit of bonhomie is contagious and even age-old enmity is forgotten. 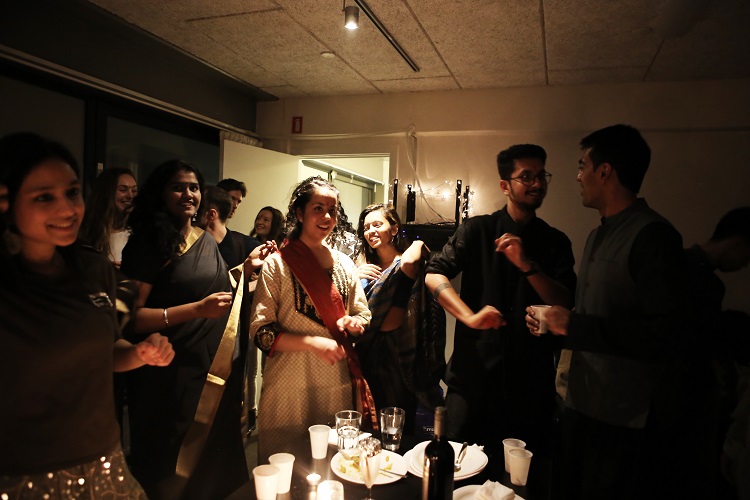 Miles away from the hustle-bustle of their home, on November 7, a group of Indian students tried to infuse this festive spirit in quiet little Aarhus (minus the fireworks, of course!) They were eager to share a bit of their culture with other students, both Danish and from around the world, and even donned their traditional attire. The ladies were draped in sarees and salwar suits while the men were clad in kurtas and Nehru jackets. It was a wholesome celebration as everyone sportingly indulged in some Bollywood dance and music, and savoured spicy pav bhaji (an Indian dish of bread served with mashed vegetables curried with special spices) made by the Indian students. The sparklers and candles lit as part of the festivities made for a very pretty picture. All in all, the celebration was as some might pun, “LIT!” 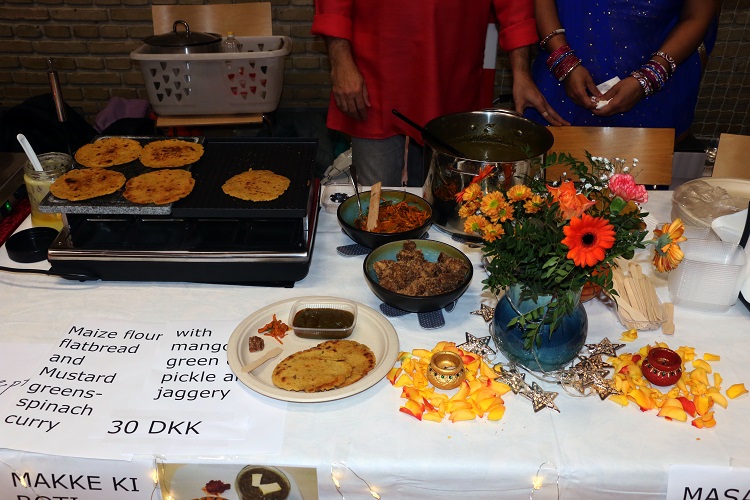 A week later, on November 17, a slightly more extravagant affair called the Diwali Mela, was organized by the Indian community in Aarhus in collaboration with the Indian airline, Air India. As the event coordinator, Dr. Ripudaman Singh puts it, “the event has been an annual celebration of Diwali in Denmark ever since 2007” and one might add has become a tradition in itself. People from all over Jylland especially Aarhus, Billund and even Copenhagen flocked to the Aarhus Academy for Global Education to avoid some serious FOMO (fear of missing out)! Being themed as a fair, there were stalls set up where you could taste cuisines from different corners of this diverse nation or admire and, of course, purchase traditional trinkets such as glass bangles in vibrant hues and statement earrings of oxidized silver, to name a few. People adorned in ornate Indian attire – that included a few sporting Danes – thronged the street food stalls savouring tangy chaat, piping hot samosas and kachoris which would have to be followed by cool, soothing dahi bhallas to put out the fire one might feel in the belly. But those were just le hors d’oeuvres! Moving on to the main course, from the north there was makke ki roti (maize flour flatbread) with saag (mustard greens) and chicken in a rich cashew gravy served with flavoured rice. The south of India offered light, fluffy idlis (rice cakes) and crunchy, golden vadas with coconut chutney on the side. To cater to one’s sweet tooth there was lip-smacking gulab jamun (sweet dumplings) and kheer (rice pudding). 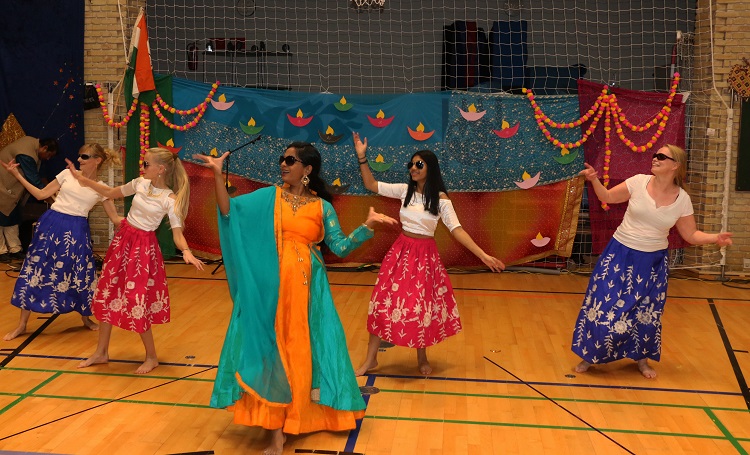 A feast such as that, fit for royalty, can only be complete when accompanied by hearty entertainment. The cultural program was a whirl of melody, colours and dancing both graceful and upbeat. A pleasant fusion between the traditional and contemporary was brought about as elegant Bharatnatyam and Dandiya performances seamlessly flowed into energetic Bollywood numbers. Overall, this Danish Diwali created a nostalgic space for the Indians to feel more at home while the rest of the community indulged in some joyous moments filled with bonhomie.

With this robust celebration, unfortunately, comes the curtain call for the Indian calendar of festivals but not for long. After some merry Yuletide holidaying to lift the spirits, we shall be back with more scoops on Indian new year celebrations and of course, our other blockbuster Holi, the festival of colours, that shall invigorate this quaint city of Denmark. 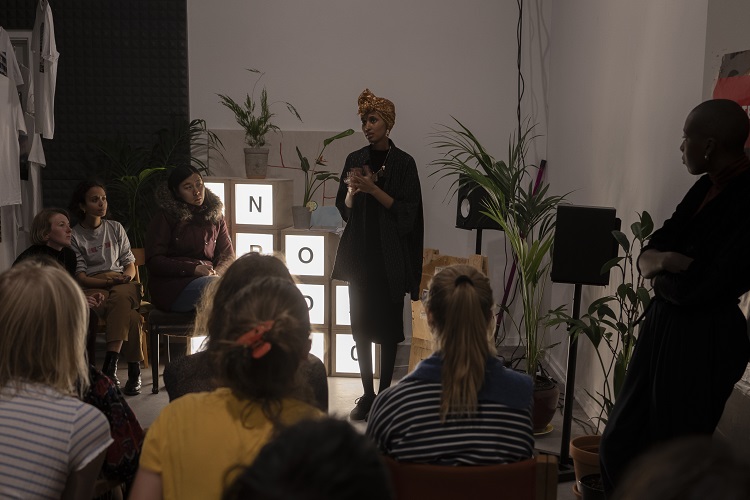 Previous article « When words become your veil of resistance: a conversation with Amina Elmi 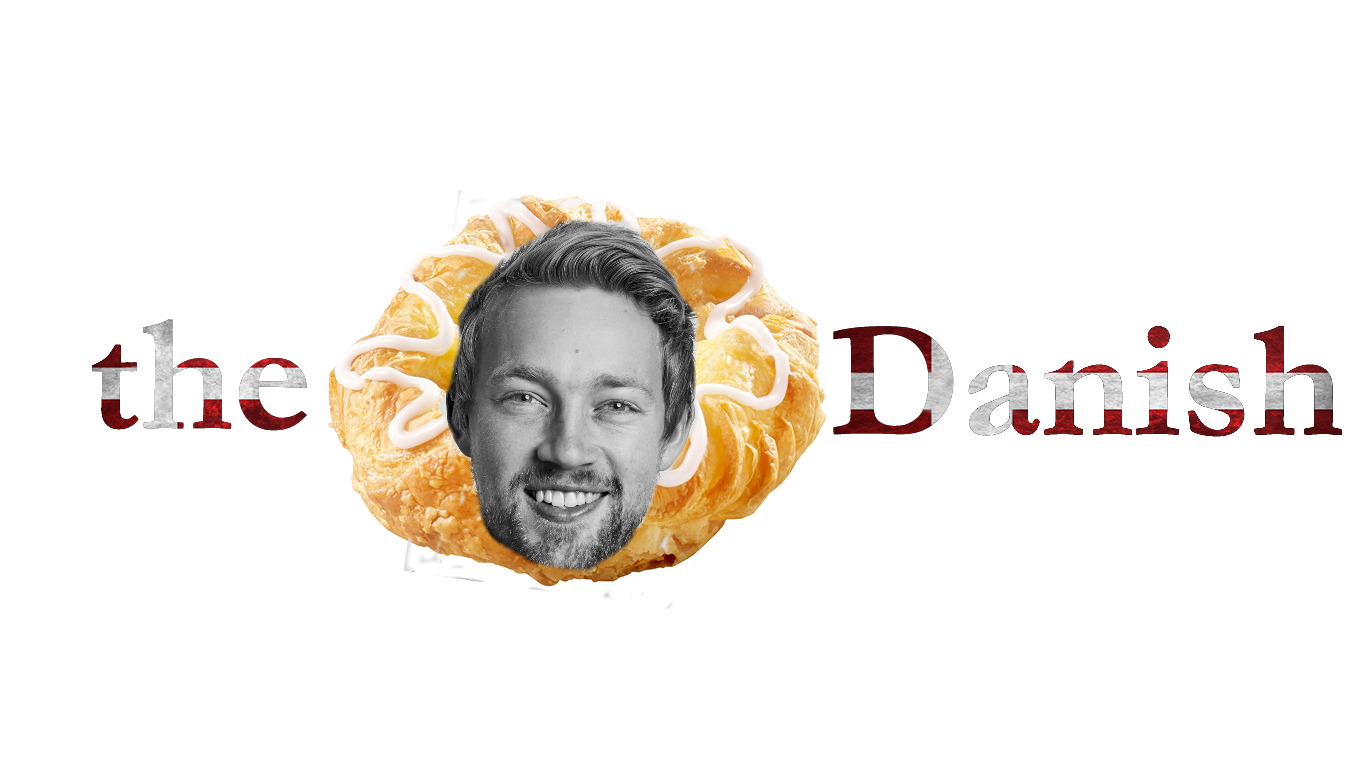