When words become your veil of resistance: a conversation with Amina Elmi

Amina Elmi is soft-spoken yet her words are sharp and her presence is powerful. She stands firm in the corner of a room in Andromeda 8220, an art space/gallery in Gellerup, Aarhus.  Huddled around her are a group of people eager to listen to her speak. She turns to the silent audience and asks them to identify the “veil of resistance” within themselves. She then reads the words that she has so intimately crafted on the pieces of paper.

Amina was born in Mogadishu, Somalia and emigrated to Denmark with her parents when she was only three years old. She describes her Somali background as one of the reasons she became a poet. She started out as a spoken word poet because it allowed her to disappear behind her words. “Even though I was visible and I was on stage in front of people. Nobody was focusing on the fact that I was wearing a hijab. People were only listening to my words, what I had to say and my ideas,” she says. The 25-year-old Somali-Danish poet tackles themes such as migration, religion, womanhood, blackness and storytelling. Her work, as she puts it, centers around the questions of “what it means to grow up as a black Muslim woman in a majority white space?”

She says she feels more comfortable writing in Danish, yet at the reading that took place on Nov. 2nd at Andromeda 8220, the majority of pieces are in English, only some Danish and Somali. She reads a collection of her writing from poems, to stream-of-consciousness fragments and questions – a brief insight to her mind and thoughts. 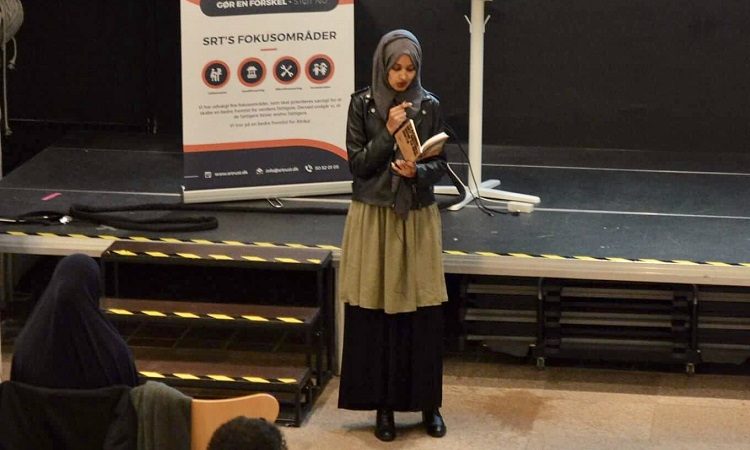 Amina is a Danish Somali young poet who tackles themes of migration, womanhood, religion and identity in her work (photo: courtesy of Amina Elmi)

Jutland Station interviewed Amina Elmi to talk about her poetry, and the role that her identity, religion and culture have in her work.

Jutland Station: When did it become obvious that you have a story to tell?

Amina Elmi: I have always been influenced by the Somali language because it has been filled with metaphors and it has a really rich heritage. When I was growing up I would watch a lot of Somali theatre, and we would also listen to a lot of Somali music. Somehow that kind of stuck with me. Even if I write in Danish mostly, the way that I write out specific images and how I create images is mostly influenced by the Somali background and those early memories. There is a lot of Somali culture that centers around the natural world, nature and man’s relation to nature which really inspires me. It has to do with agriculture and Somalis being nomads, so they write about man’s relation with nature. They do it in a very elegant way, it has a lot of layers to it. And also, poetry in Somali culture had different functions. Poetry was used for political reasons. Even some warlords were poets. So, it is such a deep-rooted thing in the culture.

Jutland Station: What does poetry allow you to do that other forms of art and literature don’t?

Amina Elmi: I think poetry allows me to open up, to touch some spaces that I cannot do in prose because poetry deals with the specific. A sentence has to be a story in itself. In general, poetry makes me go slow with my own process and I really enjoy that. Because I do have a lot of things to juggle with. For example, if I take a theme like migration, there is ten other things popping up. So, how do I answer the question of trauma? Or silence? Stuff you can’t say, mental health issues, violence… all these things pop up when I ask one question. Poetry allows me to examine these sub-questions.

Jutland Station: You mention that you “write about black womanhood, faith, the multicultural upbringing but also the madness of it all.” Can you please explain what you mean by the “madness” of it all?

Amina Elmi: I use that word [madness] because I feel like sometimes when you are a Muslim woman or a black woman, or both, you have to be nice about things, you have to sugarcoat things, you have to tell the good sides of things. That’s why also, this Egyptian writer Mona Eltahawy says that Muslim women are caught between two sides: the white patriarchy, and the religious patriarchy. That is also what I realized really fast in my own journey. And that is why I use that word madness because there are mad aspects to these experiences, and there are shadow parts to it which I am not shying away from, which I want to talk about. I’m not going to allow myself to be a voice for a specific case or anything but just truly being honest about my experience and knowledge of things.

Jutland Station: Why do you think it is important to make the experience of black Muslim women visible?

Amina Elmi: Because they are not there, we are not there. I think that specially in Muslim spaces black women are very invisible, and I can feel that in my day-to-day life, where you have to prove you are Muslim if you are black. Black women are erased from that. It is a known fact that because Islam came from the Middle East, some Arabs have a tendency to think they are closer to the religion somehow. There is a lot of racism here and we do not talk about that in Denmark. When we talk about discrimination against Muslims, we as a community are not talking about all the ways we ourselves are also discriminating. 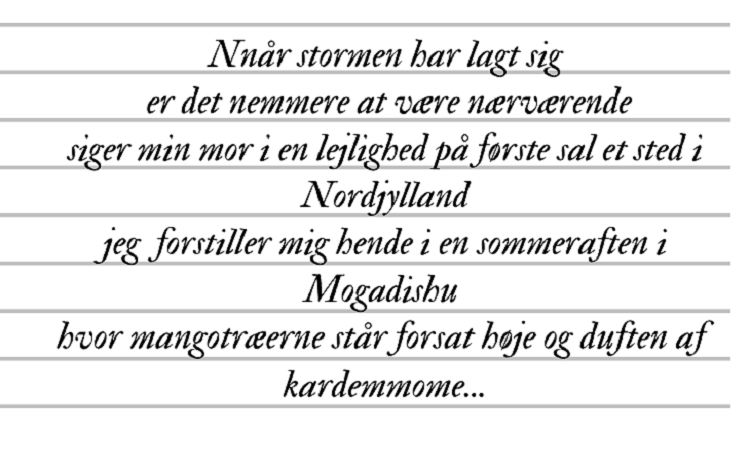 Her Somali heritage and her search for her own identity is present in her poetry.

Jutland Station: Have you experienced discrimination here in Denmark?

Amina Elmi: Yes, I have. Both from white Danes who say some sexual harassment remarks, or people who have stopped their cars to yell stuff or being randomly said to: “fuck you”. I have also experienced discrimination from Arab people who think they are more superior.

Jutland Station: In your poem, “Når dansen er et sprog vi genkender hinanden ved” (“When dance is a language we recognize each other with”) you talk about the differences in how your mother and you perform a traditional Somalian dance. How do you cope with the roles that the Danish and Somalian identities play in your life?

Amina Elmi: That is such a good question and something I have struggled with for a long time. In the beginning, in the early parts of my childhood I was leaning to the Somali side, where I was rejecting my “Danishness”. I was Somali; therefore, I couldn’t be Danish. I was Muslim therefore I couldn’t be western. And also, because I grew up in a space where we were a lot of kids who were Somali, Arabs, Turks, and had different backgrounds. You had to be aware of where your family came from, to speak your language, to know who you are. Also, because there was this fear at home from the parents’ side. As a child you notice those things, you notice how they feel about having friends who are different. So, I was definitely leaning towards my Somali side. But I gained a strong religious identity because I have been a strong spiritual person and I felt that the only language I knew came from the one I grew up with. Not that religion played a vital role but that was the language I had so I was super performative about it. When I turned 18-19 I started asking questions and I had a more balanced approach to my identity. I said, ‘well dude I have been Danish and Somali all my life.’ And I felt really peaceful about that realization and having no fear about anything. 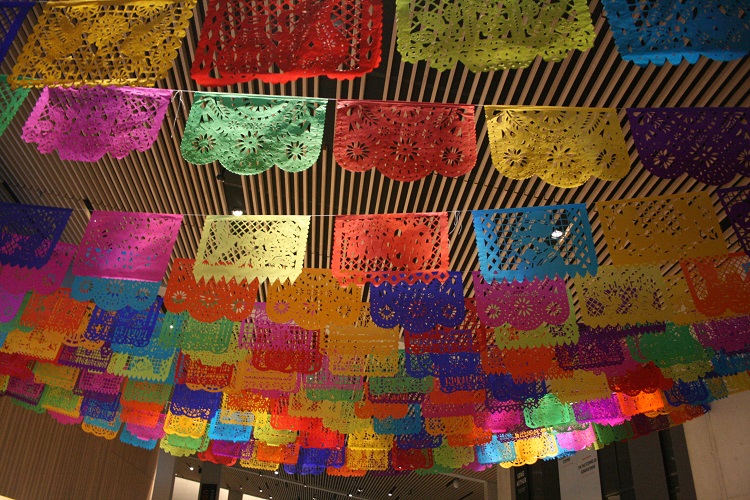 Previous article « The rise of the Day of the Dead 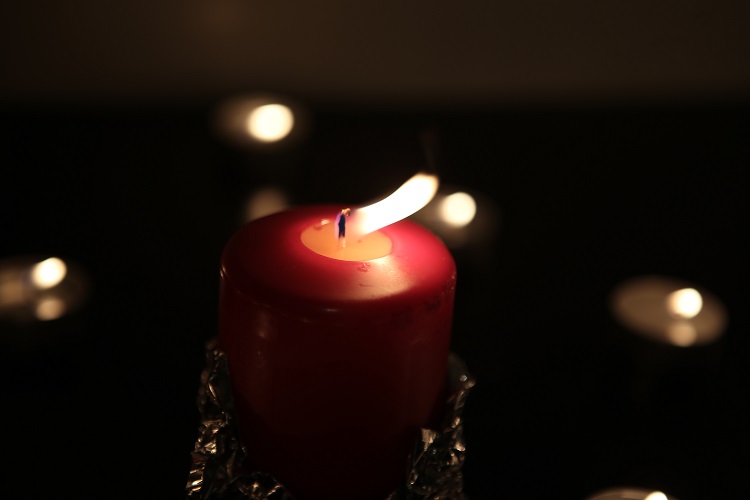 Next article Have yourself some Indian hygge »